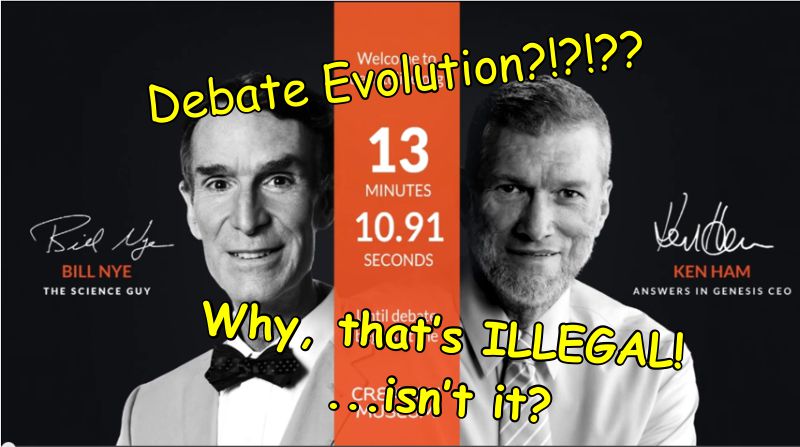 Well it turns out a California teacher wanting to show the debate in his class (after all, scientific debate was and still is an important part of science, is it not?) and was BANNED from doing so!  This was alleged as an attempt to “sneak creationism” into the classroom.

Hat-tip to Teno Groppi http://www.genesisevidence.org/ who brought this article to my attention, with what I think is a very valid observation: If the evolutionists really thought that Nye had won the debate, they would be happy to show the video in the classrooms.

While I personally felt that Nye did win the debate, I would not say it was by a landslide, and (as I pointed out on Genesis Week https://www.youtube.com/watch?v=sWLzj_dt1Jg) it was certainly not because Nye was correct! Nye was obviously and gloriously ignorant on so many things, and made so many glaring errors of fact, that it took a LOT of work to address it all and keep the show under the 28-1/2 minute time limit. In fact, I left a lot of information out, some of which was addressed in a follow up show in the mailbag. (https://www.youtube.com/watch?v=NplUzM_kwF4, starting at the 23:00 mark with the question from Josef)

So why ban a teacher from showing the debate in class? Because the anti-theists (such as the National Center for Science Eradication…er…..Education) are desperate to avoid any scrutiny of evolution. Why? Because evolution crumbles under even light scientific scrutiny – and they know it. Creationists welcome scrutiny. The Apostle Paul said to “test ALL things.” (1 Thess 5:21) I agree with him. Let’s test everything – creation, evolution, intelligent design – let’s test them all and see which one stands under scientific scrutiny. When was the last time you saw a physicist demanding that teachers be banned from showing any videos of debate over his theory? When was the last time a biologist solicited school policy to block any questioning of his scientific theory or discovery? It never happens. Evolution is the only theory requiring protection from scrutiny, soliciting that protection from policies and laws. It’s ludicrous and an astonishing act of anti-science played out in our schools virtually every day.

By the way – the courts have never deemed it “illegal” to teach even young earth creationism is schools.  As long as the teaching does not promote nor refute any one religion, it’s a-okay.

You can catch my responses to the Ham/Nye debate in two Genesis Week Episodes: 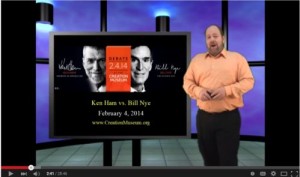 Starting at the 23:00 mark, the question from “Josef in Alberta”: 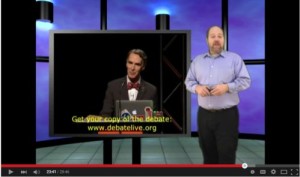 What do you think? You think the debate should be shown in schools? Defend your position!