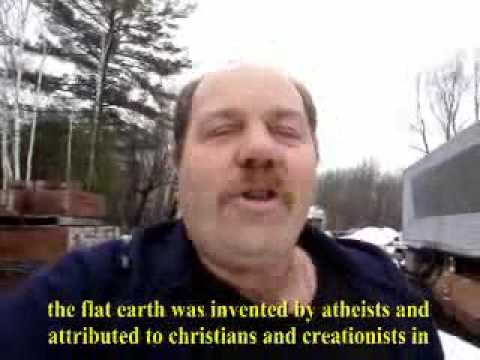 “Your logo should be a flat earth, cause that’s what your Bible is telling you.”
(Young Master Gandalf, YouTube)

[insert Beevus and Butthead chuckles here]
This is on the list of stoopid arguments and it’s incredible how often this comes up. Yes, even Brian Alters, professor of evolution at McGill University, publically brandished his astonishing ignorance using this pathetic argument as an insult against the then National Minister of Science and Technology, Gary Goodyear. I responded to Alters in a newsletter here: http://ianjuby.org/newsletter/?p=157
and in CrEvo Rant #213, “Creationists are scientists too.” https://www.youtube.com/watch?v=Gsrd3y0YooI

But let’s return to the anti-theist who posted the remark on my YouTube channel. We’re all human, and we all make stoopid comments once in a while. Perhaps he honestly didn’t know the truth, and needed to be edumacated. No problem, I’m a nice guy, I’ll use Google (cause I know how) to search for what I had to say about the flat earth, and I provided a link to CrEvo Rant #271, “The Flat Earth.” All I did in that video was discuss the story of Columbus sailing the ocean blue in the face of danger and certain death as they could very well sail off the edge of the flat earth. I pointed out how this was actually a complete urban legend – a myth, as documented by historian Jeffery Burton Russel (a man who is certainly no friend of Christians or Creationists!) in his book “The Flat Earth Myth.”

The skeptic then responded:

“Why do you make things up? A flat earth was for many centuries held up by the CHURCH, cause that is what the Bible sais. Read Job 38 and indeed Isaiah 40:22. All ancient people belived the earth was flat, just do some research on this topic and you see paintings of a flat earth, non of a ball earth. Why do you think in Isaiah is written this: “It is he that sitteth upon the CIRCLE (not ball or round) of the earth” . If those people that wrote this had known the earth was like a ball, don’t you think they would have used that word (ball), no they believed the earth was FLAT with a sort of dome above it. Do some research on the flat earth, and you will see its all comming from the Christians, not the atheists.”

I pointed out how actually the atheist author, Jeffery Burton Russel, disagreed with him. Russel pointed out how it was antitheists who concocted the flat earth myth, and that the Christians of the day knew full well the earth was round. 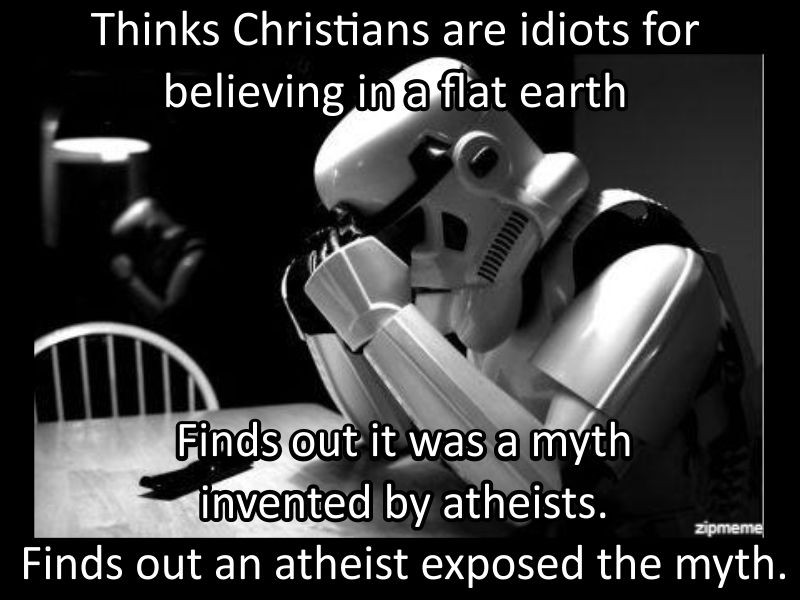 I then challenged the skeptic and asked him to provide references to said historic drawings or writings from the Catholics, or whoever it was he felt claimed the name of Christ and believed in a flat earth. He declined, saying:

“Its no secret that the christian official piont of view was that the world was flat, regardless of what people tought. I don’t feel the need to come with references about something that is common knowledge. We all know the world is a sphere and not flat. And I do hope you know Wikipedia articles are written by men like you and me, and can not be trusted on some objects like this flat earth. It was imo simply not mentioned, so there was no discussion on the subject until Gallieo and others came up with their calculated and measured findings of a globeworld. So please don’t change history!!!”

Wow. The irony is overwhelming.  As I pointed out to him, even Wikipedia – the harbinger of anti-Christian propaganda, says:

According to Stephen Jay Gould, “there never was a period of ‘flat earth darkness’ among scholars (regardless of how the public at large may have conceptualized our planet both then and now). Greek knowledge of sphericity never faded, and all major medieval scholars accepted the Earth’s roundness as an established fact of cosmology.” Historians of science David Lindberg and Ronald Numbers point out that “there was scarcely a Christian scholar of the Middle Ages who did not acknowledge [Earth’s] sphericity and even know its approximate circumference”.

Obviously if it was “common knowledge” that the Bible and Christians believed in and taught a flat earth, then surely that “common knowledge” would have made it on to Wikipedia!
Just like it is here on the Genesis Week website, I can delete comments and comment threads on my YouTube channel. Generally speaking, I follow my stoopid arguments policy there as well. This was one of those instances where I let the comments stand, so the world could see for themselves exactly how everything unfolded. Judge for yourself who is “making things up,” and “changing history.”  He didn’t provide references to back up his made up arguments for the simple reason that there isn’t any references. His claim is patently false.

What about you? Were you aware that the “Flat earth” was a myth? Leave a comment down below.